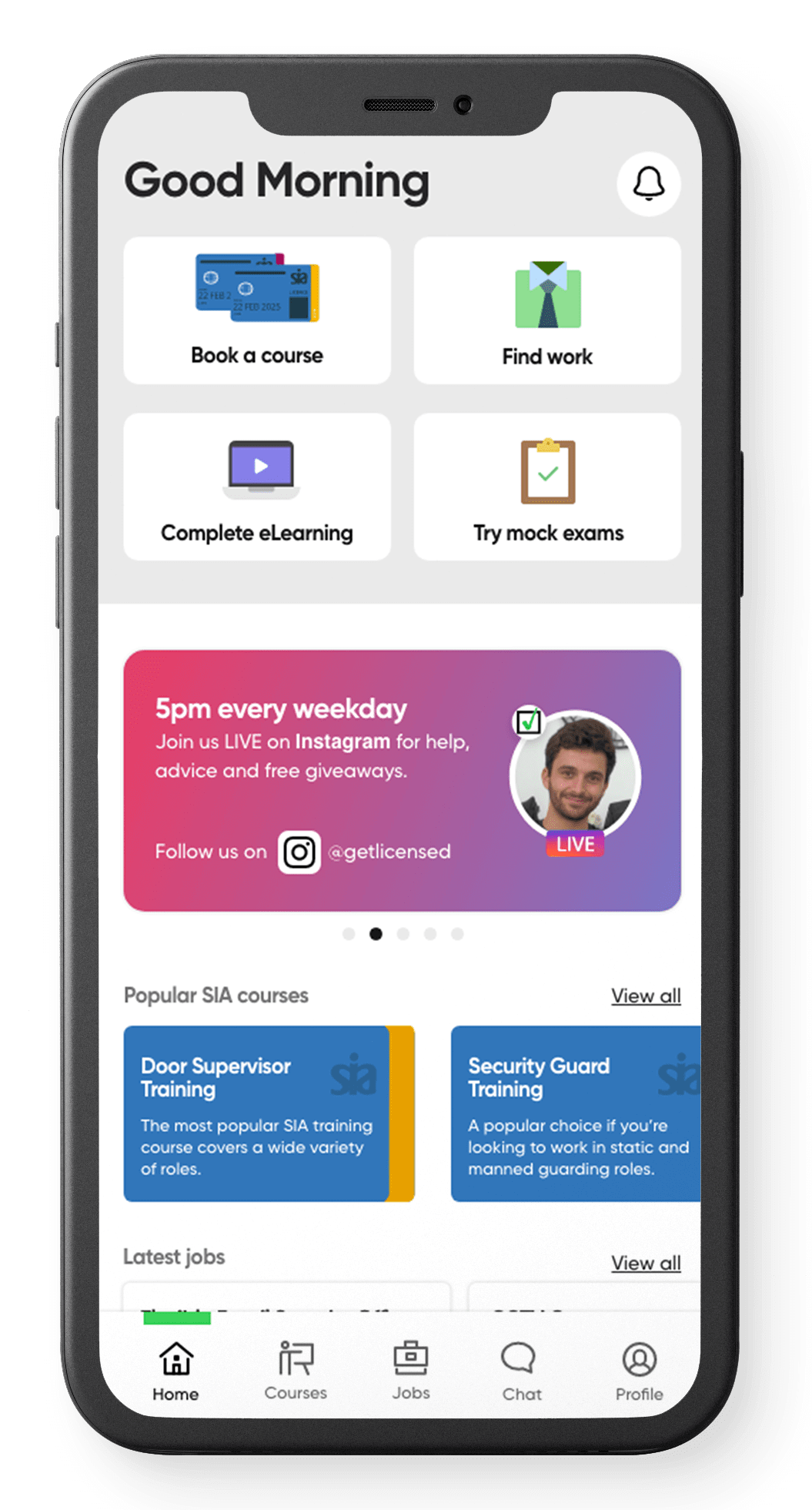 Download
Get LicensedTM App
Test your knowledge, get access to free learning materials and find work - all in the same app.

Security training and hiring solutions for businesses of all sizes.

Open an account today to book training and hire staff.

Get your SIA licence with the SIA training experts in Birmingham Find out which SIA Training Course is right for you

Find out which SIA Training Course is right for you

Select from the options to find your perfect SIA course in Birmingham.

Do I need training to work in the security industry?

The Door Supervisor Training Course is required to obtain a SIA Door Supervisor Licence. This allows you to work in the private security industry as a Door Supervisor or Security Guard. Door Supervisors usually work at licenced premises but can work in a wide variety of roles including static guarding, manned guarding and key holding positions.

The CCTV course is a legal requirement to obtain the CCTV Licence which enables you to work as a CCTV operator. CCTV Operators usually work in a control room which is connected to a wide array of camera footage and are responsible for monitoring and observing behaviour and suspect activity.

Why work as a Door Supervisor and Security Guard?

The Door Supervisor Licence is the most versatile licence in the industry as it allows you to work as a Door Supervisor but also as a Security Guard in a retail environment.

On the Door Supervisor training course, you will learn a variety of skills, including conflict management and how to defuse a potential high-risk situation. You will also go over how to search members of the public, to what to look for when profiling a member of the public.

Passing the Door Supervisor course allows you to apply for a SIA licence to get you working in the security Industry.

Why work as a CCTV Operator?

One of the great things about working in the security sector, is the possibility to build upon your existing skills and acquire much sought-after opportunities. Most people that start out within the security industry might find themselves working as a Door Supervisor or a Retail security guard, however, CCTV operating is highly flexible and can open even more doors.

AS A CCTV Operator you will be performing a variety of tasks, most notably watching and studying live images sent from closed-circuit television cameras to spot and prevent crimes, accidents and incidents.

You will learn how to operate a CCTV camera and how to spot potential criminal and suspicious behaviour on the CCTV Training Course.

Why work as a Close Protection Operative?

Acting as a Close Protection operative means you will provide physical protection to a client shielding them from potential harm and getting them to safety as quickly as possible. A principal could be anyone from a VIP, celebrity or even someone with a high net worth like a business person.

You won’t find the same course anywhere else cheaper

We extensively check our Training Providers listing courses on Get Licensed. Only once they have passed our rigorous tests can you search and book their courses.

When you book a course through Get Licensed your money is held safely in a holding account which means that you will never pay for training that doesn’t take place. The money is only released once your have successfully attended you training which really means that you can buy in confidence.

There are many SIA training courses in Birmingham for interested individuals, allowing them to obtain the credentials needed to find rewarding and well-paid jobs in this growing industry.
- Door Supervisor Training
- Security Guard Training
- CCTV Training
- Top-up Training for Door Supervisors
- Advanced Physical Interventions and Handcuff
- Emergency First Aid at Work
- APLH - Personal Licence
- Level 3 Physical Interventions
The courses offered focus on different domains within the security sector including door supervision, CCTV, first aid, personal licence, and will give students the necessary understanding to work in a variety of different scenarios. The SIA training in Birmingham also addresses the different techniques used in day-to-day experiences of those working in security positions.

Thanks to the Birmingham’s strong economy and tourism, the necessary of qualified security personnel is very high in this city. In addition, individuals currently working in establishments that sell alcohol to the general public may be interested in NCPLH Personal Licence Training in Birmingham. Moreover, working as a trainer in such qualification courses is another lucrative career path to consider. SIA Licence is valid nationwide, so if you qualify for SIA License in Birmingham, you will be able to get security job anywhere in the U.K.
Contact Get Licensed’s SIA Training in Birmingham today at the address:
Fairgate House, 205 Kings Road, Tyseley, Birmingham, B11 2AA
Tel: 0207 078 7259
Read more information on SIA course time and price.

AmarSingh (August 22,2012)
Just here to say thanks to Aiyehsa for her training at Jurys Inn Birmingham. Had a wonderful weekend with the rest of the boys. Hopefully I'll pass.

Located in the West Midlands county of England, Birmingham is the second largest city in England. The city was once home to a thriving manufacturing base that played a significant role in the Industrial Revolution. Today, Birmingham is one of the most important commercial centres in England, and has one of the largest economies in the nation. The manufacturing industry no longer holds the influence it once did in the city, having been largely replaced by the services sector. Furthermore, the city is the birthplace of two of England's largest banks, Lloyds Bank and Midland Bank, which is now known as HSBC.

Simple. Once you have decided that you want to enrol on the SIA security training in Birmingham, all you need to do is conform the date in which you wish to attend and complete the necessary next steps. Once completed, you will receive a conformation e

We offer price match if you find the same course cheaper elsewhere.

Get FREE access to eLearning course materials instantly after you book

We never charge any booking or hidden fees

Over 90% of our customers pass the exam in the first attempt. We are open 6am to 8pm on weekdays and 9am to 6pm on weekends. If you need help outside these hours, visit our help page to find answers to the most commonly asked questions.

Don’t get left out. Join the conversation.